With Cobar temperatures stuck in a rut, we’re looking forward to Nigel’s next exam – if only to escape the incessant heat. On the 13th of January, he’ll return to his Goulburn cell (well, size-wise anyway) for the final HWP exams while Bowie and I return to all things sand and surf and await his arrival on the 18th of January (We love the good sergeant!).

The transition from general duties to highway patrol has been a fun experience…. just joking…. it’s been a juggling act of working overtime then coming home to an hour of Radar maths (with Maths teacher Kaye) followed by Radar theory (Kaye was no help at all) followed by dinner around 10pm , then crawling into bed only to wake up at 5.15 am and do it all again the next day. Talk about burning the candle at both ends and in the middle too!

While Nigel toggled between working and swatting, my days were spent picking up the abandoned chores that no longer fit into a 24 hour day.

Thankfully he passed the dreaded Highway Patrol Phase 3 exam with 86% and also managed to avoid a re-submit for the assignment where 50% of the class weren’t so lucky. I say lucky but the reality was that he studied, researched and memorised like a demon and deserved every mark. In fact, we’ve developed a new-found appreciation of Highway Patrol officers so there’ll be no more talk of cockroaches and fear of the dark.

And just for fun, here are some examples of what he’ll have to know when he sits his final exams next week (complete with answers in red for anyone who might otherwise get them wrong):

In stationary mode, the frequency of the energy returned from a moving target is:

(a) decreased when the target is receding

(b) decreased when the target is approaching

(c) increased when the target is receding

(d) decreased when the target is approaching in moving mode

When performing a tuning fork test in moving mode which tuning fork is held to the antenna first?

(d) it makes no difference

(a) only after it establishes patrol speed

(b) without a patrol speed being present

(c) before it establishes patrol speed

(d) only when it exceeds the radar’s minimum speed threshold

When used operationally, the radar antenna must be set up:

(a) externally during inclement weather

(b) internally during inclement weather

(c) less than 2 metres from the front of the vehicle

(d) between 1 and 2 metres from the ground

If the radar power supply voltage drops below 10.8 volts:

(a) the Silver Eagle II would cease to operate

(d) the device would continue to operate normally

The transmitter frequency of the Silver Eagle II radar is:

Production at court of a certificate issued under section 46 of the Road Transport (Safety and traffic Management) Act 1999 is the responsibility of:

(a) the Radar Engineering Unit

(b) the operator at the time of the offence

See what I mean! As you can see below, Radar Maths is much more enjoyable:

Vehicle 1 travels at 143 km/h and is 745 metres behind vehicle travelling in the same direction at 102 km/h.

FIND: (a) Distance vehicle 1 must travel to catch vehicle 2.

FIND: (a) position of each vehicle (from start) after 20 seconds.

FIND: a) Closing rate speed in metres per second.

c) frequency of the audible tone.

f) Distance apart at the completion of a 4 second check.

a) Distance apart after 27 seconds.

b) Distance apart after veh 1. has travelled 1km.

And here’s an example of a fun definition of a ‘driver’ – to be memorised of course:

“(1) A driver is the person who is driving a vehicle (except a motor bike, bicycle, animal or animal-drawn vehicle).

(2) However, a driver does not include a person pushing a motorized wheelchair.”

While Nigel has been contemplating proofs of offences, powers of arrest, definitions and road rules, Radar, Lidar and all things Doppler I’ve become somewhat of a different expert – in the field of weeds (notice the pun?). How many of you knew that there is more than one type of cat head (officially known as Caltrop),…… or for that matter, what a cat head is? Well, I’m here to tell you that we have had two varieties springing up all over our yard and their hard spiky thorns are VERY painful!

After espousing my determination that this tenure would be different – that I planned to ignore all things weedy and green, it seems I just can’t help myself and hours have been spent, pulling out said weeds, sowing grass seeds in their stead, ridding the Wilga tree of Mistletoe (although, according to plant biologist David Watson, the jury is still out on whether these host-mimicking plants are friend or foe) and digging out rocks and pieces of slate and blue metal from the dusty red dirt.

But these photos will hopefully attest that progress is slowly being made…… with a bit more work to do. 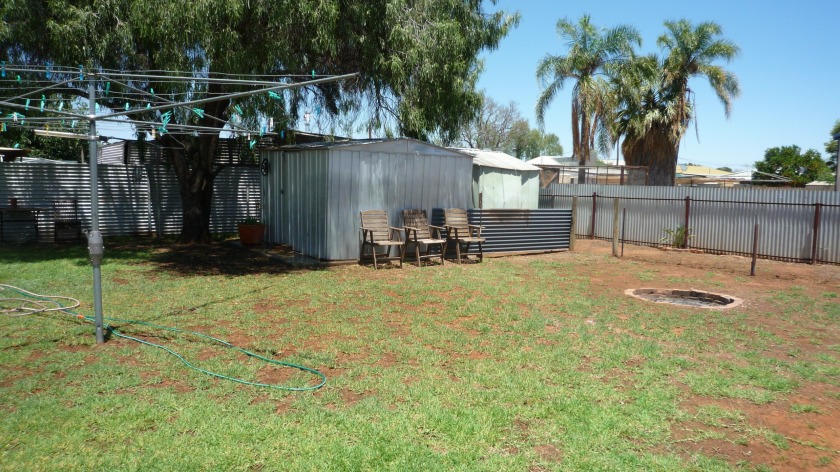 BTW there’s an interesting article on Mistletoes written by the ABC’s Abbie Thomas. You can find it here: http://www.abc.net.au/science/articles/2004/03/05/2044992.htm

And if anyone knows the name of this tree with pink flowers, I’d love to hear from you. 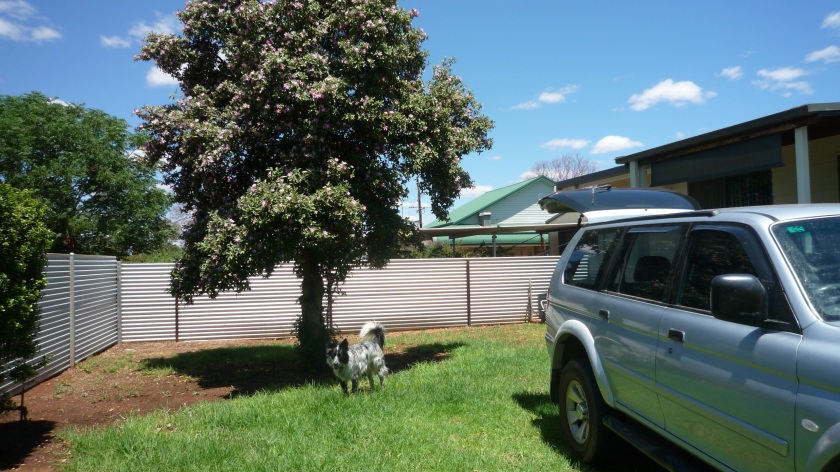 Happy New Year and best wishes for health and happiness in 2019!