Last Saturday was exactly 3 months before we move back to Paradise Beach, with all that entails – shops, affordable internet and medical and dental facilities. Bring it on! In the mean time, here’s an update of our life in Enngonia.

When Lucky got Harley and Rose, the original plan may have been to fatten them up and eat them. But when I changed their names (originally Sunday and Roast) they became ‘family’ pets and were allowed to live on the condition that all other sheep remained nameless. When Harley got lucky (did you appreciate that turn of phrase?), Whipper and Snipper arrived some time later – to everyone’s amazement because we all assumed that he had been de-sexed in time.

Sadly we lost Snipper within the first few days and then Rose succumbed to bloat a few months later. When we ran out of grass and Whipper and Harley were put in the Chiller yards (fenced enclosure with chillers for kangaroo kills) last winter, both sheep were attacked by dogs that managed to burrow under the fence. Whipper didn’t survive and I think he died of exhaustion from being chased (no attack marks). So Harley was moved back into our yard and hand fed – he now loves bread and Cornflakes – and luckily sheep seem to have short memories because all is now forgotten. Bear is tolerant but not enamoured of Harley but Lucky now has two dogs so we’re planning to put Harley with a friend’s flock of merinos. As a black-headed Dorper he’ll stand out, which will ensure that he doesn’t ever get eaten by mistake.

At the end of 2012, I naïvely accepted a casual position as acting principal of Enngonia Public School so that the principal, Rosie (In hindsight we probably shouldn’t have named the sheep after the principal in such a small town), could have surgery and then recover at home (next door to the school). Rosie kept up to date with what was happening at school and would email regarding decisions to be made as well as suggestions of what to do (unfortunately, she hadn’t prepared anything in advance of going to hospital). With no primary or kindergarten training to fall back on, I found the whole experience rather mortifying and was extremely glad when it was over.

To its credit, the school managed to survive the experience and when Michelle, (an enthusiastic primary-trained casual) was appointed relieving Principal in 2013 she was received with open arms and the status quo was restored. http://www.enngonia-p.schools.nsw.edu.au/

After months of drawing plans, securing quotes, and writing and re-writing the grant application there was a fair degree of elation when, in July, we secured $8,553 towards the town’s first cenotaph. 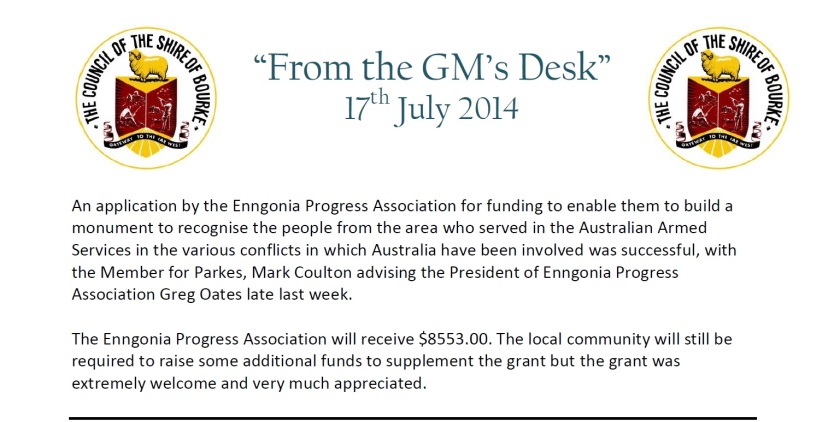 However, the elation now seems premature as we wait and wait for the RMS (Roads and Maritime Services authority) to grant the go-ahead to start building. We had hoped that the work might be completed in time for Remembrance Day but now we’re hoping that it will make it for Anzac Day next year.

So if anyone includes RMS executives in their circle of friends, we’d really love a hand getting over this last hurdle.

The art mural has come to a standstill and is awaiting Fulla’s return. Fulla was spending time with Max (one of the elders, who has since, recently passed away) as well as another sick relative down the coast. While we were waiting we arranged a couple of fun mornings where the school kids came over to hand-print a flat iron board (which will be decorated and attached to the wall) and then crawl over the police truck – with the obligatory lights and sirens. The highlight was apparently when one of the students found a dead bird stuck to the front of the radiator, which immediately became the centre of attention. Perhaps teachers should take note.

The other day, Nigel was surprised to receive a phone call from the Commander (Yes, it does sound a bit like Batman) asking whether he knew that our house was getting demolished in 6 weeks (or maybe The Hitchhiker’s Guide to the Galaxy). Nigel said Yes he knew but he hadn’t been given a time frame. And so began a series of hurried inquiries between the Command and “Properties” (who knows?) regarding the fact that NSW Police would have to pay removal costs for us to be moved out while the house was demolished, then again to move us back in to the new demountable 4 weeks later and then again in January to move us back to Paradise Beach. Not really a good use of taxpayers’ money. Plus no one knew where 2 people and a dog were supposed to stay during that 4 weeks!

Unusually, common sense has prevailed and the demolition will now take place in February – after we’ve left. I say unusually because, despite the impending demolition, maintenance is still being carried out on a regular basis – fire extinguisher checks, air conditioner maintenance. In fact, on the same day that the Commander was confirming the demolition, tradesmen arrived for the annual asbestos inspection. Considering most tradesmen come from Dubbo, stay overnight and charge accordingly, you really have to wonder.

That’s pretty much all I can think of (I heard that sigh!) except that the Enngonia Rural Fire Service has just become the proud owner of a brand new fire truck – complete with incorrect spelling (Enngonnia) but as Ray, the Fire Chief said, “It won’t make it go any faster”.  Photos thanks to NSW RFS web site.

And a warning to any firies, who receive one of these ‘you beaut’ trucks with the new-fangled Mercedes double burn exhaust systems – DON’T PARK IN LONG, DRY GRASS. Apparently the double burn happens underneath the truck at a very high temperature and a couple of grass fires have actually been started by fire trucks. Not a good look!