When I first started writing this blog I sought advice from other Leo (law enforcement officer) wives and came across Lisa and her blog http://twopointfivekids.com.au/.

Although we each have different styles and audiences ( she has a following in the thousands and mine is, maybe, 10) she became a mentor of sorts and gave me a lot of good advice.

One of the things she said was to stay under the radar with the police ‘powers that be’ and avoid any references that might give away too many personal details.

She recounted an event where they had just moved into a police residence that had been a morgue and, in naive excitement she had put up a video of the residence. Not only did that draw some attention but also the ire of  head office, who demanded she take it down.

With today’s security risks it might be understandable but back then, in a country town where everyone knew everyone else’s business it seemed a bit over the top. Still, it was sage advice and I’ve used it ever since, making up names for people in town and never displaying external photos of the police residences.

So it was kind of ironic, the other day, when I asked one of the locals (delivering a load of firewood thanks to Cobar Buy Swap Sell) if he found the house okay and he replied, “You should have just said the copper’s house”. 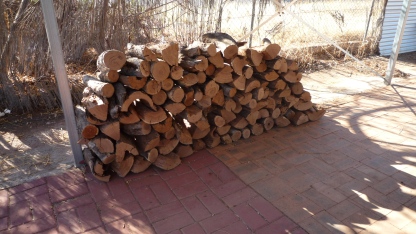 Actually, as I’m writing this I’ve just realised that I’ve already broken my self-imposed rule and Naomi really is Naomi!! Darn! The problem is that my emails to friends and family usually contain more personal information than my blogs and every now and then it’s a juggling act to separate the two. Hence I’m in the process of experimenting and hopefully, eventually there’ll just be the blog…. With its 10 loyal followers. That way, I won’t need to resize photos or clog up peoples’ digital mailboxes.

So having failed on the privacy front, let me just change the subject to say that today Alan (not his real name) is delivering a second fridge – also thanks to Cobar Buy Sell Swap), which I traded for $50 plus a brand new spotlight bar (she says, looking quite chuffed). Remember the new house that never eventuated? Well I may have jumped the gun buying kitchen lighting plus a letterbox but the guy selling the bar fridge happened to be an electrician and the rest is serendipity!

It’s good timing because, after researching amps and joules and all things ‘power surge’, I still have absolutely no idea what sort of surge protectors to invest in and I’m planning on picking his brain. All I know is that we escaped the storm last week (all noise and not much rain) with our appliances in tact and I really don’t want to tempt fate a second time.

As one of the locals explained, people in the outback don’t think to warn newcomers about power surges and the loss of appliances because no one consciously thinks about it – it’s just force of habit where they turn appliances off at the wall when not in use.

Remember Enngonia where in one week we lost a clock radio, computer and washing machine? Well, just days prior to leaving Paradise, our washing machine packed it in and we were forced to buy a new one (“can you please deliver that tomorrow?). Then with the first load of washing in the secondhand machine at Cobar, it started leaking and again we were forced to buy a new machine – who knew there was a Harvey Norman in Cobar? – apparently the trip was all too much for it!

Now I like spending money as much as the next person but I’m more a travel, Champagne and chocolates rather than washing machines kind of girl!

And speaking of laundry appliances, before we left Paradise we naively decided that, as it hardly ever rained in Cobar, we’d save some money and avoid buying a dryer. What were we thinking??? We’ve now realised that the clothes dryer was never about drying the clothes. It was about getting the dog fur off Nigel’s police uniforms!!! Hmmm another excuse to engage with Cobar Buy Sell Swap perhaps.

In the same random vein of wandering from one topic to another, did I mention that we saw an emu walking past the house the other day? It gave us that sense of outback familiarity, as did watching Imparja (which from memory is a combination of Channels 9 and 10), pulling cats’ heads out of our shoes and having to buy bottled water (for the next 4 years) because the water here is quite ‘hard’ and, well, you only drink it once. Then of course there’s the recycling – or lack thereof – because in the bush, no one recycles. Now having said that, I’ve come across a scheme that the Empire Hotel has instigated and I may have to retract that statement – I’ll get back to you.

Love to all, Kaye and Nige

PS for those who were unaware, Beary passed away in June last year leaving us absolutely devastated. In hindsight, we probably shouldn’t have chosen the exact same breed when we bought Beau because, missing Bear so much, it’s hard not to make comparisons. But Bowie is his own ‘person’ and while he’s quite a handful at times, he has a wicked sense of humour and we’ve grown to love his cheeky ways. In this town where every second dog seems to be a Blue Heeler, I’m sure he’ll fit right in.

One thought on “Random Rave”