Hi to all from sunny Enngonia. It amazes me that we live so close to the Queensland border and yet my fingers are frozen!  When we first arrived, the fireplace had quite a workout thanks to some free Gidgee wood from one of the local station owners but sadly that wood has now run out. Sunny skies don’t necessarily equate to warm temperatures and it’s actually  bloody freezing, causing us to retract all the nasty, scoffing remarks about never being seen dead in a Snuggie and admit that in fact, we’re both sorry we don’t own one.

I’m sitting on the lounge, typing rather awkwardly at Nigel’s laptop, which is on the coffee table – not the most ergonomic of positions but unfortunately my desk top computer is broken and beggars can’t be choosers.

It seems that there are gremlins in our meter box (not to mention frogs) because in the space of a week we’ve lost our clock radio, microwave, washing machine and now, computer. 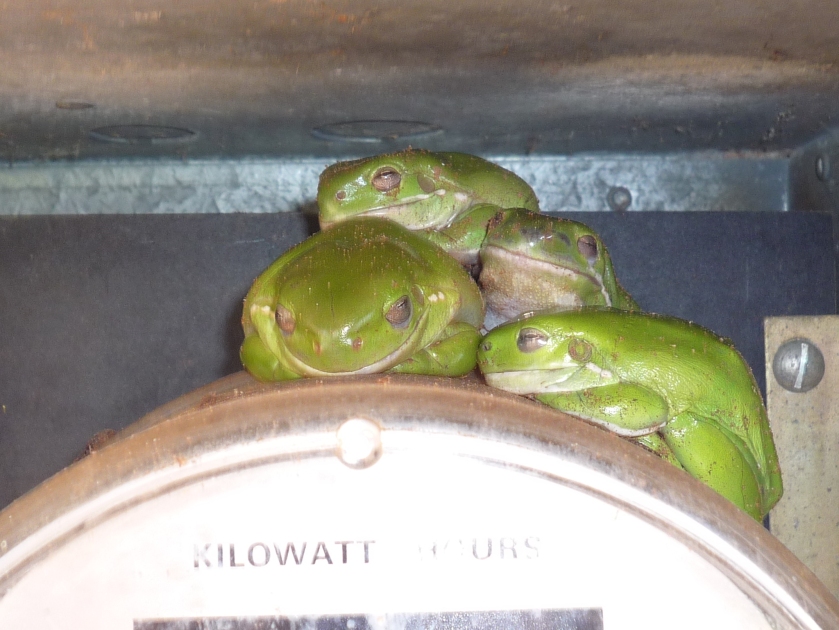 Being rather slow to see the connection (electrician’s pun), we simply purchased new items online – Yes, the mail contractors actually delivered a brand new washing machine to our door step!

Of course, it helps if you know your delivery address but, with just a handful of roads, there’s very little need for street numbers in Enngonia and so there aren’t any. Thus began the quest to find someone, who actually knew our address. Numerous phone calls were made (we don’t actually own a phone yet so we used the police commander system…… memories of Ivanhoe) and numerous locals were asked and various addresses were suggested – “it could be Number 8” or “it might be Number 4 because the Primary School is Number 8” and “I thought it was Number 5” until it was concluded that our address is Lot 4 of Section 8 and we were finally able to update our personal details (“the Enngonia police residence” is just not good enough for car insurance) as well as apply for phone connections (any day now) and, more importantly, buy online.

To be honest, before we moved, I did try to glean some information: how big is the residence? how many bedrooms? DO WE NEED WARDROBES? and what was the previous phone number? But most Bourke cops have little idea of life in Enngonia so no one could help. But I digress.

It was the staff at Retravision (Yes, Bourke actually has a Retravision), who suggested that the demise of our appliances was probably due to the regular brownouts around the town and advised that if we were to buy their power surge protectors, that would be the end of our problems.

Unfortunately, after parting with $340 for the surge protectors, we were informed (Hi to Essential Energy) that they only protect against storm surges -not brownouts. Now we like spending money as much as the next person but at this rate, we’ve calculated that we can only afford to stay here for another four and a half weeks before we go broke.

Enter the Essential Energy travelling technicians with impressive vocabulary like “trip and reclose”, who have put a gadget on the meter to log the electricity output. After a week, we should know more. Hmmmm……to be continued. I should say that our experience wasn’t all that remarkable and the locals could all tell you of similar trials involving brownouts and appliance break downs. It’s a testament to their patience which I, as a city slicker, am sadly lacking.

On a more positive note (another electrician’s pun) and considering no one knew our address, credit should go to Australia Post because, despite the lack of street numbers, the mail contractors always ‘get it right’.

Mail arrives at Bourke and is then dispatched by mail contractor, every Wednesday and Saturday when most of it is delivered to the Enngonia Primary School or the Police Station and then the rest goes to the pub. So most people turn up at the pub to collect their mail. Very civilized!!

News just to hand – a recent event in a neighbouring LAC (across the Queensland border) saw a police officer, Oliver (first names only) out driving on a dirt road when he hit a patch of water and rolled the truck. After walking 15 kms (3 hours) back into town he phoned the Command and told an inspector that he had a problem. The inspector replied that there are no problems – just solutions, to which Olly replied that he’d better have a really good solution because he’d just rolled the police truck.

The Rural Fire Brigade took him back out to the truck, rolled it back over and let it stand for a while for the oil and diesel to settle so that Olly was able to drive it – slowly – back into town. Olly remarked to Nigel that it was a testament to Landcruiser “Troopies” – “You just can’t break them”. Needless to say, Olly’s nickname is now “Rolly”.

Speaking of trucks, because we’re on the Mitchell Highway we often see some spectacularly large objects being transported to and from Queensland, not to mention that trucks out here are allowed to pull three trailers…. or dogs as the locals call them. 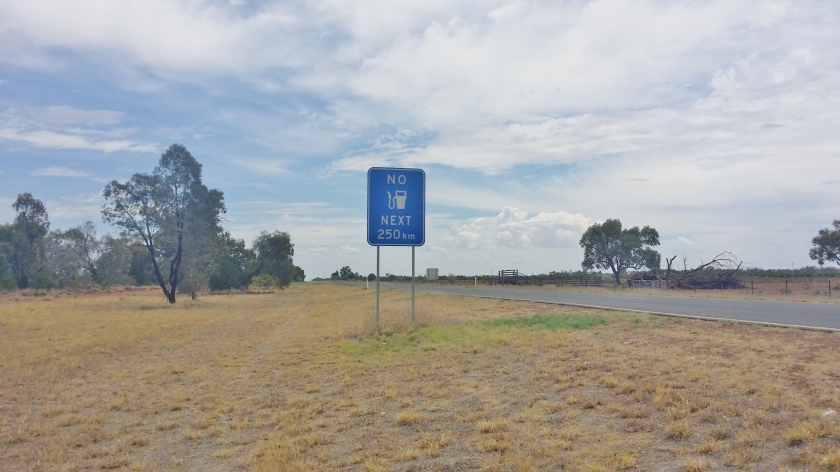